A Virus for a Bigger Brain? 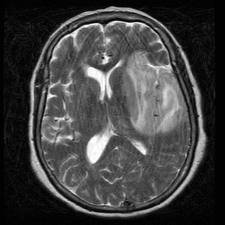 Can a virus make your brain bigger? Well yes – quite literally so when we’re talking about Viral Encephalitis. A couple of case studies I’ve encountered on my journeys pushed me to find out more about this intriguing medical scenario.

Viral encephalitis is a very worrying (clinically speaking) disease manifestation whereby your brain and central nervous system tissues swell up. Other nervous tissue damage can occur too and particularly problematic cases arise when bleeding occurs within the brain, called an ‘intracerebral hemorrhage’. There’s a number of symptoms to watch out for, from ‘light sensitivity’ and fever to partial paralysis and coma! If you’re lucky enough to receive treatment – your odds of survival are significantly improved…..BUT this depends on a number of factors:

But even if treatments work – a survivor may still have neurological problems for the remainder of their life!

Despite the Latin, I hope I’ve still got a hold of you!

So, quite a few then!

In so called ‘developed’ countries, HSV-1 is the most common inducer of viral encephalitis, with just over 2000 cases per year, to quote USA figures. Here in Asia – JEV has the throne, causing up to 50,000 cases annually. Incredibly, we have a vaccine for JEV – but its pretty pricey, costing £150 from the NHS in the UK. This doesn’t really do the population who are most at risk of contracting JEV many favours, as they’re not so likely to have the means to pay for it.

For HSV-1 encephalitis, its acyclovir. This drug is the standard for HSV infections, and generally does the trick to reduce the rate of mortality from 70% to about 30%.

As for Japanese Encephalitis….here’s a story:

I had the honor of shadowing a veteran in Tropical Medicine, in a busy hospital within Ho Chi Minh City recently. He approached one patient in a severe comatose state – scoring 2 on the Glasgow Coma Scale to be precise (http://en.wikipedia.org/wiki/Glasgow_Coma_Scale). The Doctor, deep in thought and concern, turns to me and confirms:

“This patient tested positive, through molecular diagnostics, for Japanese Encephalitis”..

I immediately feel the weight of his words. “What’s the prognosis?” I reply.

“Tough to say. The patient is under treatment with acyclovir, and fortunately, making slow but steady progress.”

My eyebrows raise. Acyclovir!? Acyclovir was specifically designed to combat the Herpesviruses – a completely different genetic construct to the family which JEV belongs to. My naive knee-jerk reaction is to blabber this exact thought….

“Why acyclovir? I thought that was for herpesviruses!?”

The Doctor flashed a knowing smile. “So did I. But we did a clinical trial a few years ago – and it seems to work. Because of those results, its now almost a standard treatment for Japanese Encephalitis here in Viet Nam. Nobody knows exactly why it works though”….

Pleasantly surprised by this fancy info, all I could reply was a monotone “Oh, that’s cool”… when I’m really thinking “Bloody hell that’s amazing. Tell me about the trial. Any guesses as to how it works”….but really – there’s no time, and he moves me onto the next patient who also happened to be suffering from encephalitis, although the root cause of this case has not been confirmed by any diagnostic test.

I’m constantly reminded as to how fragile life is. However, nothing brings it home more than witnessing a fellow human fighting for survival and whose chances ultimately depend on the Doctor’s call and the nature of the beast (the virus) which put them in such a way. We are extremely fragile, but luckily, Scientists and Doctors are taking leaps and making huge advances in health-care all the time. Following their hunch that acyclovir might help treat Japanese Encephalitis is testament to the beauty of daring to take risks to save lives.

Whilst Viral Encephalitis is still a problem globally, causing thousands of deaths per year, let us hope more advances like these can be made to halt this cruel disease.