“Not a Bloody Clue!” 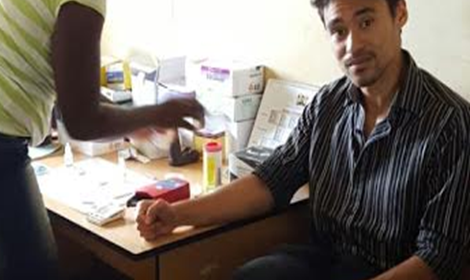 I find myself on a ward-round in the tropics, and if I’m being brutally honest, I haven’t got a bloody clue.

The raucous alarm panics me into emergency mode early on this cool morning in rural Kenya. I take note to thank our resident rooster later.

Being cajoled into an early morning start actually turns out to be a decent thing as I have been invited to join in on the local hospital’s ward-rounds today. Any grogginess is quickly dispelled by the semi-functional cold shower and so, I fix myself up and look sharp, wanting to make a smart impression to the hospital staff who have agreed to let me in. Breakfast has been reduced to a solitary banana (OK, I had two!) and a swig of bottled water with doxycycline before I head on past the shouts of “Msungu” (effectively meaning ‘White Foreigner) from the neighbourhood children. I dodge a few cow-pats, jump a chicken and shimmy my way past a rogue donkey through the empty market stalls before making the road which leads on to the Hospital.

I check my watch – it reads 7:20AM. I’m early, and I feel good about this largely because it is rarely the case. At the hospital entrance I make the usual greetings and let some staff know I’m waiting to meet someone who has agreed to take me through their morning ward rounds, starting at 7:30 AM.

“Nobody is around yet!” I am told.

“No it’s OK. I was told yesterday to come early at 7:30 because that’s when the ward rounds will be. I’m sure my contact is arriving soon”.

“Nobody is around yet. Some went home as it was their night-shift. Maybe in one hour. Come back in one hour. That will be fine..”

Not wholly unsurprised, I acknowledge the new agreed deal and head on back to the accommodation. The extra hour gives me time to enjoy a coffee while I mull over a small textbook on Tropical Medicine, trying to second guess the cases I would come across and brushing up on some of the basics in the process.

Given that the surrounding county to where I am based has a HIV prevalence of 24%, I decide to dig into the different manifestations of HIV/AIDS. These however, can be fairly wide ranging, from other opportunistic infections making their presence felt through oral thrush or Kaposi’s sarcoma for example, to neurological complications. I get three quarters through this bulky solitary chapter before having to dash back to the hospital for the delayed start. Suffice to say, I was not well prepared.

With a few beads of sweat running down my temples I clarify from the outset to the lead Doctor on duty this morning that…. “I am not qualified as a Doctor. In fact, I am right at the bottom rung of the ladder, about to start my medical training. I’m just grateful to be here to watch, shadow and observe, because of my interest in tropical diseases”.

We get going, starting with Patient 1. The lead Doctor immediately puts me on the spot. “This 10 month old baby boy is not well. His temperature is high and he has been vomiting. He appears very weak now. “What do you think?”

Here’s what I think. I think I don’t have a bloody clue. This solitary thought encompasses my entire mind. I stare blankly, jitter and pause, in search for words that may at least appear intelligible. I offer a cautious “Errmmmmmm……”

The seasoned Doctor wades in. “He’s actually already tested as positive for…..”

“Malaria?” I stab in the dark. It’s not an unreasonable call to make based on the minimal information I have.

The Doctor’s eyes settle on mine. “Yes. Malaria. And he is about to have his second dose of artesunate”.

Oh. Lucky guess for me then.

However, five babies and four malaria cases later I soon realise that this was not a lucky guess at all. Out here and in other rural areas, Malaria is still a gigantic problem. What I am observing this morning is both a disheartening and striking reality. Without artesunate in all its power, these children may not stand a chance. The Doctor explains the issues over adequate resources to test for other, potentially complicating conditions. I nod my head in appreciation for how well they work with what they have at their disposal and wonder whether his physical examination of patients is resultantly more comprehensive than the majority of western Doctors.

We make our way to Patient 6, who does not test positive for malaria but has spiked a fever, thrown up a couple of times and experienced two bouts of diarrhoea. The patient’s breathing is also laboured.

“What do you think?” asks the Doctor. And again, I don’t have a bloody clue. I can see he is testing me, and even my useless involvement in a brainstorming exercise may help to clarify his own, developed, thought process.

But now he asks what I think we should do. I can see there isn’t a lot of equipment about, and I know the diagnostics at their disposal is limited. There probably isn’t time to run a bacterial culture given the current context, and in no way can I suggest how to run a useful physical examination to narrow down the possibilities. Again, I have little to offer.

“I don’t have a clue. It could be anything?”. Pathetic.

The Doctor agrees (that I don’t have a bloody clue) and decides to run a Salmonella Antigen Test (SAT), as they’ve got the necessary kit to do it. Two broad spectrum antibiotics are already on the chart. They hypothesise as to whether the breathing is due to an allergy and again the Doctor looks at me inquisitively.

I stare blankly back. He gets the picture.

I am useless, and as intriguing as the case presentations are, the rest of the morning plays out in more or less the same manner.

This was not my first time joining in on tropical ward rounds, but it was my first time to be on a ward round with such limited resources and I am grateful for the learning opportunity. In previous encounters, Doctors had X-Rays, viral-panel screens and otoscopes to work with and quiz me from – at least giving me a handicap of sorts even if I did turn out to not have a bloody clue. Regardless, I enjoyed this ward round which added another layer of experience to my very young journey into Medicine so far. Rather than putting me off from working in the tropics as a clinician one day, it intrigues me more that very often, even with gadgets at are disposal, we still may not have a bloody clue. So many questions arise from this – Can the physical examination be honed for improved diagnostic acumen in such contexts? Can we sample and is it realistic to encourage and deliver on better molecular diagnostics? How can we combat drug resistant pathogens in resource-limited settings? Several questions remain, and I’m excited to roll my sleeves up and get stuck in!